Eminence products are handmade without any severe heating or hydrogenating processes that can affect the nutritional content and potency of natural ingredients. Vitamins are captured in their all-natural fresh base, offering dramatic results as actual seeds, pulps and peels impart regenerative and healing powers that only nature can produce.

This Month's Special - What Is Neroli Oil And How Does It Benefit Your Skin?

Even when you fancy yourself smart about skin care, you may occasionally cross paths with a product ingredient you’ve never heard of that comes with a whiff of exoticism. Case in point: neroli oil. Eminence Organics uses this ingredient in several of our award winning and perennial best selling products, yet what do we know about it? Let’s take a closer look and find out exactly what neroli oil is, its surprising origins and its benefits in organic skin care.

What Is Neroli Oil?

Who would have thought that this glamorous and mysterious ingredient is actually derived from the humble orange? Neroli is the prettier name given to the bitter orange flower, a close relative of the common navel orange. As the name implies, unlike navel oranges, bitter oranges are just that – bitter. In fact, they are commonly called “marmalade oranges” as they are historically used to make this tart British spread. Much like rose oil, neroli oil is distilled from the bitter orange flower via hydrodistillation (a.k.a. steam distillation) where the flowers are carefully steamed to release the fragrant oil.

It was named after Anna Marie Orsini, the 17th century Princess of Nerola, Italy, who used it in her bath as a perfume and to scent her gloves.

The name “neroli” came about after crusaders first brought the brightly-colored bitter orange from Asia to Europe. It was named after Anna Marie Orsini, the 17th century Princess of Nerola, Italy, who used it in her bath as a perfume and to scent her gloves. Anna popularized the use of neroli in beauty, but prior to her, neroli oil was a highly traded commodity used in ancient Egypt, traditional Chinese medicine and even to help fight the plague.The scent is often cited for its use in aromatherapy as it can reduce the levels of cortisol in the brain (monq). 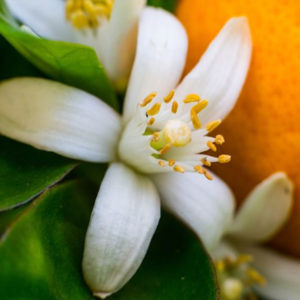 What Are The Benefits Of Neroli?

In addition to its irresistible orange blossom scent, neroli oil can also be used in skin care. According to Patricia Davis, author of Aromatherapy: An A-Z, neroli oil stimulates skin cells to regenerate, giving it anti-scarring properties. This makes neroli a fantastic ingredient to rub on stretch marks, age spots and scars.Along with its regenerative qualities, neroli oil is also antiseptic, antibacterial, anti-inflammatory and pain-relieving.This makes it useful to treat pimples and acne and reduce the redness associated with breakouts. Solidifying neroli as a skin care saviour, it can also be used to treat oily skin, reduce fine lines and hydrate all skin types. 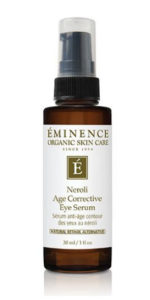 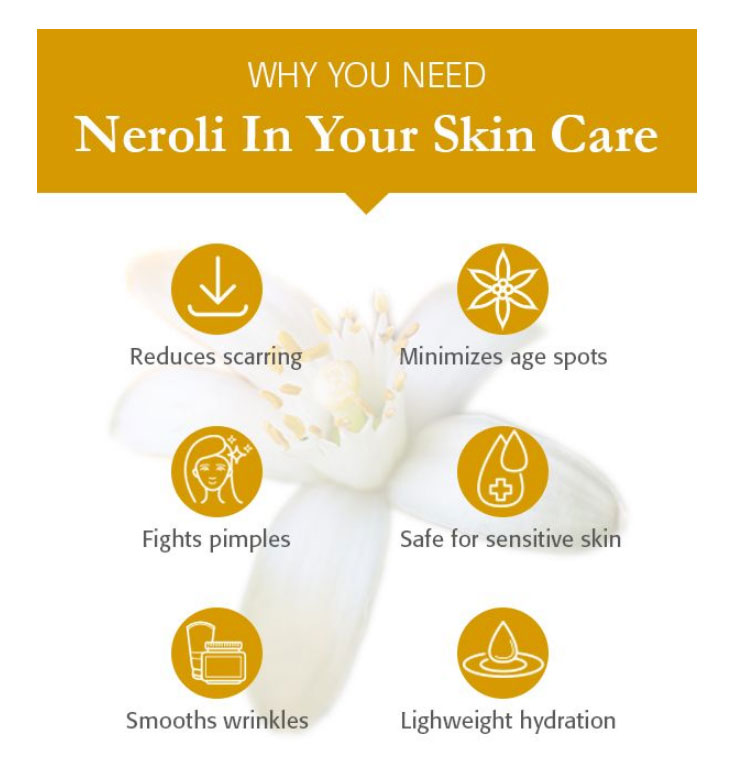 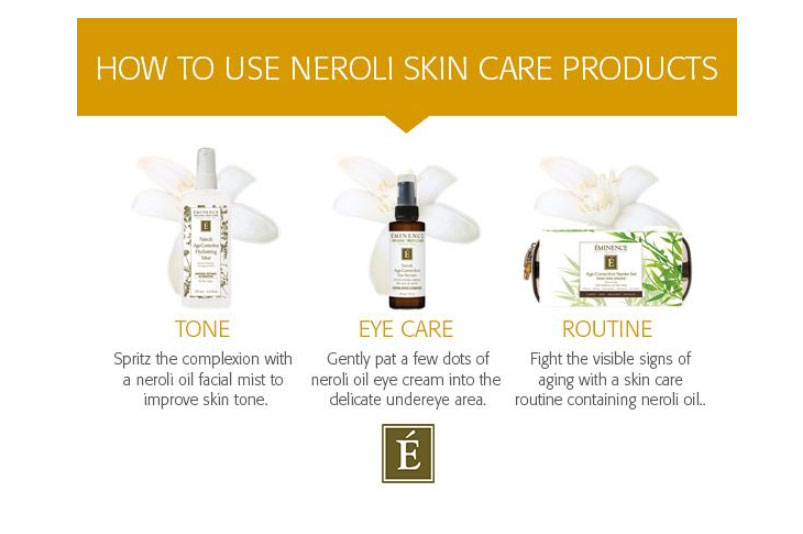 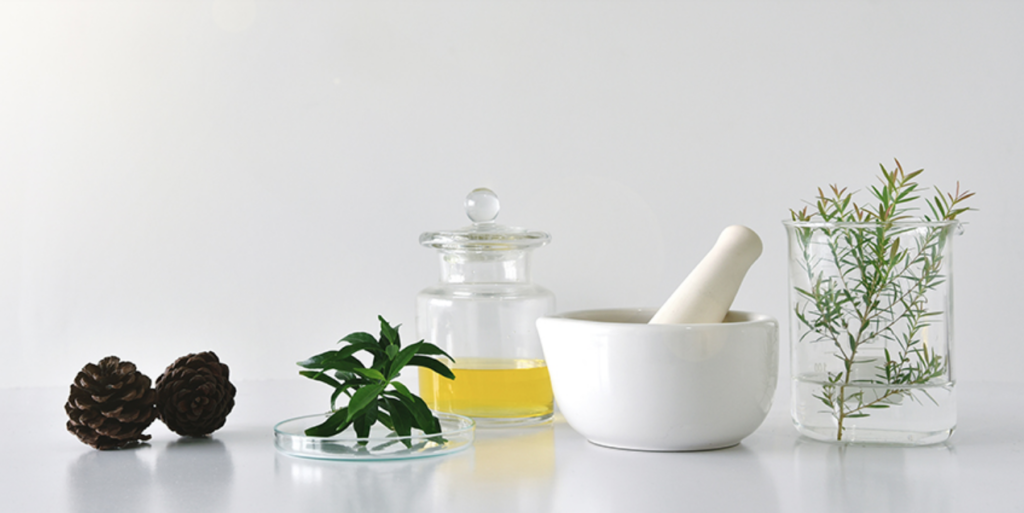 Which Products Should You Use?

As the first step in your gluten-free skin care routine, use our Mangosteen Daily Resurfacing Cleanser to remove impurities without overstripping your skin. The lactic acid (an alpha hydroxy acid) in this milky gel cleanser gently resurfaces the skin and refines pores. Antioxidant-rich mangosteen fights the visible aging effects of free radical damage for radiant and youthful looking skin.

Add additional exfoliation once or twice a week with our Strawberry Rhubarb Dermafoliant. Simply add water to this powder exfoliant to transform it into a luxurious exfoliating paste. Rice powder absorbs excess oil while lactic and salicylic acids gently remove dead skin cells, revealing a smooth and polished complexion.

Keep your skin hydrated and conditioned with a gluten-free toner or facial mist. Eminence Organics fan Meredith K. loves our Stone Crop Hydrating Mist. She says in her five-star review:

“I mist this on my face after cleansing and before I apply my nighttime moisturizer or daytime sunscreen and LOVE it! I have pretty sensitive skin that gets easily irritated and itchy and this always calms, hydrates and smooths my skin. It is amazing how much better my skin looks and feels after misting this on! I can’t be without it!” 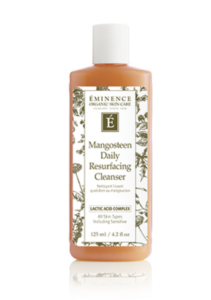 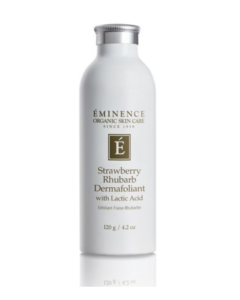 Indulge in a facial mask once or twice a week to boost your skin’s health. Our Firm Skin Acai Masque is gluten-free and packed with antioxidant-rich ingredients like acai, blueberry, raspberry and blackberry. This smoothie for your skin will firm and hydrate your complexion as well as reduce the visible signs of aging.

Serums, oils and concentrates can still be skin care saviors sans gluten. These potent formulas contain concentrated amounts of active ingredients to target concerns and enhance your skin’s overall health. Try a Biodynamic® facial oil like our Facial Recovery Oil to nourish the look of your skin with beneficial ingredients like clary sage oil, olive oil and sage leaf extract.

Keep your skin soft and supple with a daily SPF moisturizer. Our pick: Tropical Vanilla Day Cream SPF 32. This fragrant day cream pulls double duty to deeply moisturize the skin as well as protect it from harmful UVA and UVB radiation.

“I mist this on my face after cleansing and before I apply my nighttime moisturizer or daytime sunscreen and LOVE it! I have pretty sensitive skin that gets easily irritated and itchy and this always calms, hydrates and smooths my skin. It is amazing how much better my skin looks and feels after misting this on! I can’t be without it!” 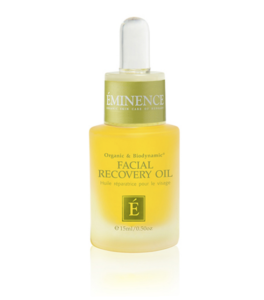 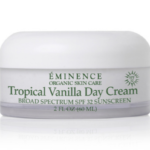